Matrix and The Belt and Road (Part 2)

Xinjiang and the Belt and Road

With a land border of over 5600 kilometers, Xinjiang province is contiguous to Russia, Kazakhstan, Kyrgyzstan, Tajikistan, Mongolia and several other countries. On the Belt and Road, Xinjiang is the gateway for the exchange of resources and basic materials between China and its neighbors to the west. 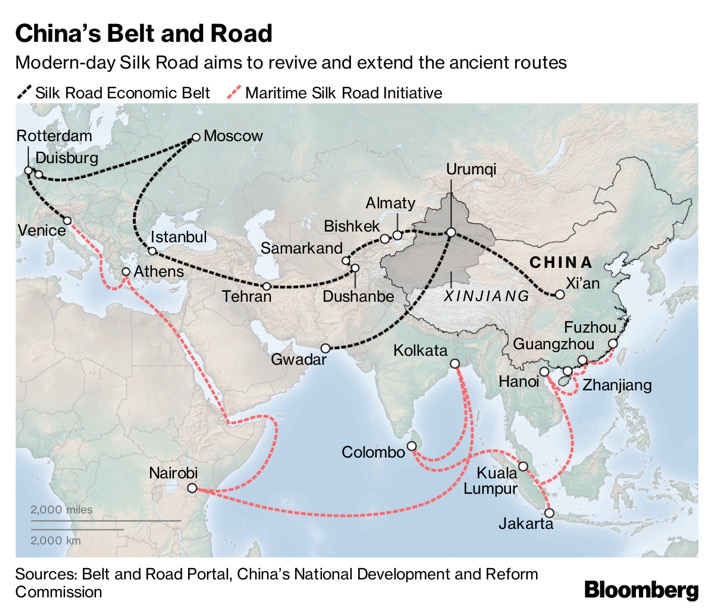 Picture: Xinjiang’s Central Position on the Belt and Road

In concordance with the Belt and Road Initiative and in a massive infrastructure construction endeavour, Xinjiang is building itself into the center of transportation, commerce, logistics, finance, culture, education and medical care for the surrounding area. In the future, Xinjiang will be providing medical services for Central Asian countries. According to Xinjiang local officials, the province is ahead of Central Asian countries in medical care, and over 1500 foreign nationals from Central Asian countries had been to Xinjiang to seek medical treatment in 2015. Not only hospitals in Urumqi, the capital of Xinjiang, but also those hospitals on the border of the province received foreign patients. In the future, Xinjiang is looking to offer medical services in one package with tourist programs.

Transportation, commerce and logistics go hand in hand. Central Asian countries are the major trading partners of Xinjiang. Although the province's import and export volume dropped to 19.68 billion USD in 2015 due to shrinking demands from Central Asia, trade with Kazakhstan and Kyrgyzstan still accounted for 46% of the province’s total, while the volume of trade between Xinjiang and Central Asia also accounted for a significant proportion of the total trade volume between China and Central Asian countries. This is to say that although many of China's exports to Central Asia are produced on China’s eastern coast or central regions, they eventually find their way into Central Asia through Xinjiang.

Xinjiang is also building itself into the central hub for the three Economic Belt routes that lead to Central and West Asia, Russia and beyond.