As news of Bitcoin price hitting 60,000 USD took financial media headlines by storm, the world was once again surprised by the growth potential of this novel financial asset. At the same time, crypto started attracting investment from mainstream financial institutions and tech visionaries (such as Elon Musk) alike. When the SEC announced it would approve Bitcoin ETFs, no one could deny anymore that Bitcoin had earned its place in mainstream institutions’ portfolios.

People call Bitcoin the greatest invention of the 21st century. This novel asset class invented by Satoshi Nakamoto has disrupted the financial sector and promises people a freer, fairer and more transparent financial life based on blockchain technology and PoW consensus mechanism.

Despite being hailed as the greatest invention of the 21st century and a price skyrocketing 70 million times since its birth in January 2009, Bitcoin carries two original sins: energy waste and computing power waste.

We all know that at the core of Bitcoin is the PoW consensus mechanism. This mechanism guarantees the security and fairness of blockchain networks, but this comes at the cost of energy waste.

If Bitcoin were a country, it would rank before Argentina as the 29th largest energy consumer in the world, and all the resources spent in mining could have been used for other socially beneficial causes instead.

If we use floating-point operations per second (FLOPS) to calculate computing power, then Bitcoin mining consumed a total of 8.3×〖10〗^22 FLOPS in 2018.

Putting this in perspective, we have:

The total computing power available to the world: 1.2×〖10〗^23 FLOPS

This is a huge waste because hash calculation in PoW mining is for encryption only. It guarantees Bitcoin transactions are accurate and immutable but does not create any other social value whatsoever. If this much computing power were used for scientific research, we might have already invented the artificial brain, which would be a quantum leap in science.

Although Bitcoin is getting accepted as a mainstream asset class, there are also criticisms. While Bitcoin bulls view energy wasteful mining as Bitcoin’s price anchor, bears argue that the waste is pointless and that Bitcoin doesn’t really have a price anchor. We can see this from Elon Musk’s attitude change towards Bitcoin. 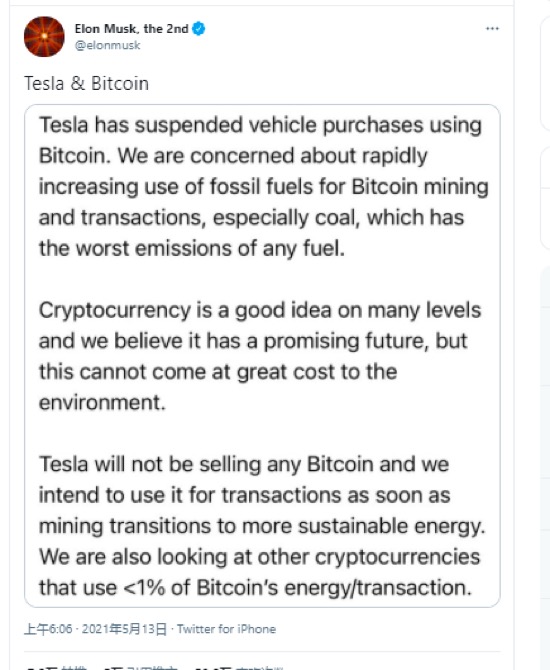 From Tesla buying 1.5 billion USD worth of Bitcoin to Musk announcing the suspension, merely three months have passed, and the news shocked crypto investors, causing Bitcoin price to halve in days.