As news of Bitcoin price hitting 60,000 USD took financial media headlines by storm, the world was once again surprised by the growth potential of this novel financial asset. At the same time, crypto started attracting investment from mainstream financial institutions and tech visionaries. When the SEC announced it would approve Bitcoin ETFs, no one could deny anymore that Bitcoin had earned its place in mainstream institutions’ portfolios.

Despite being hailed as the greatest invention of the 21st century, Bitcoin carries two original sins: energy waste and computing power waste. It is a global consensus that a green economy is the future of mankind, but with its heavy consumption of energy and computing power, crypto mining sits on the opposite side of our carbon-neutral future.

At the core of Bitcoin lies the PoW consensus mechanism, which guarantees the security and fairness of blockchain networks, but this comes at the cost of energy waste. If Bitcoin were a country, it would rank before Argentina as the 29th largest energy consumer in the world, and the resources spent in mining could have been used for socially beneficial causes instead. 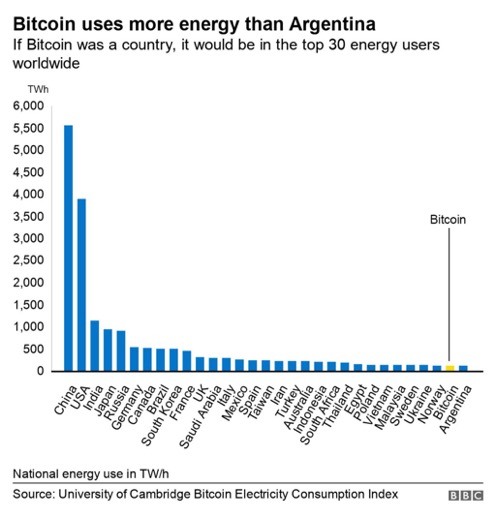 70% of the world’s computing power is used for mining cryptos, and Bitcoin mining consumes a million times the computing power available to Google. This is a huge waste because hash calculation in PoW mining is for encryption only. It guarantees Bitcoin transactions are accurate and immutable but does not create any other social value whatsoever. If this much computing power were used for scientific research, quantum leaps could have been taken.

China was the largest crypto mining country, taking up 65% of the total computing power for crypto mining, and in this sense, also was the biggest victim of energy waste. Meanwhile China has issued governmental orders to ban all types of Bitcoin mining in top mining regions, such as Inner Mongolia, Xinjiang and Sichuan. This round of banning is not only a heavy blow to Bitcoin mining, but it also shook people’s faith in crypto’s value.

Under such unfavorable circumstances, Bitcoin along with the rest of the crypto industry is desperately searching for a way out for stable long-term growth, and the question how to make mining compatible with carbon neutrality is now the industry’s top concern.

The issue of sustainable growth is the greatest hurdle to the rise of crypto and blockchain to the central stage of the financial world. To solve this problem, crypto enthusiasts and developers have experimented with countless solutions. For example, Ethereum plans to replace PoW with PoS, and Gryphon Digital Mining has announced they will mine Bitcoin using renewable green energy.

One of the most promising solutions is Matrix’s AI-empowered blockchain. Its solution is threefold: 1. to build a PoW algorithm that can generate social value; 2. to design a consensus mechanism where only some of the miners do PoW mining; 3. to create carbon neutral mining by using mining farms for central heating.

As security is one of the central benefits of PoW, we can’t do without an encryption algorithm. How do we guarantee the same level of security while making PoW mining useful to society? Matrix has the solution.

By adopting a PoW mechanism that integrates AI algorithms (image recognition) with hash algorithms, Matrix can minimize energy waste and at the same time create social value with AI computing. This way, the value foundation of MAN is not only anchored by the value of the energy spent in mining but also the computing power used for AI computing. This socially beneficial way of mining is clearly ahead of the competition.

Besides designing more socially beneficial mining algorithms, Matrix further reduces the energy consumption of mining by adopting a hybrid PoW consensus mechanism, which is essentially a combination of DPoS and PoW. Statistically speaking, election-based PoW has roughly the same long-term expected return as global full-time PoW, which is to say that the introduction of election-based PoW does not affect miners’ profits, the only concern being that the fairness of result may be compromised.

With the help of random clustering algorithms (RCA), Matrix is able to design a hybrid PoW that is truly fair and secure. Matrix doesn’t require all the miners in its network to do PoW mining in every mining cycle, and only nodes randomly chosen by RCA are involved in PoW computing. This way the energy consumption of mining is greatly reduced.

Picture: The Mechanism of RCA

Meanwhile, unelected miners can lease their idle computing power for other people and companies to use just like cloud computing platforms do. 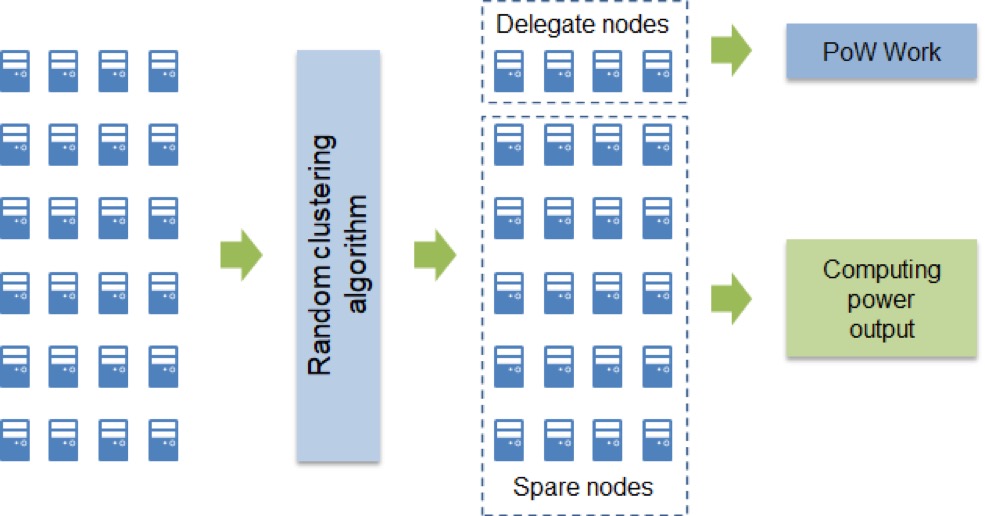 As miners already get a decent return from mining, selling computing power is a side income for them. For this reason, Matrix will be able to provide computing power at more competitive costs than conventional cloud computing platforms. In addition, Matrix has two more tricks up its sleeves.

As the team will not run this distributed computing platform themselves, but instead provide open API and SDK for anyone to use building his/her own distributed cloud computing center, this platform will be highly efficient.

In the future, Matrix will also be capable of utilizing computing power from all types of devices, like your laptop or gaming console. When idle, these devices will export their computing power to AI companies for profit. 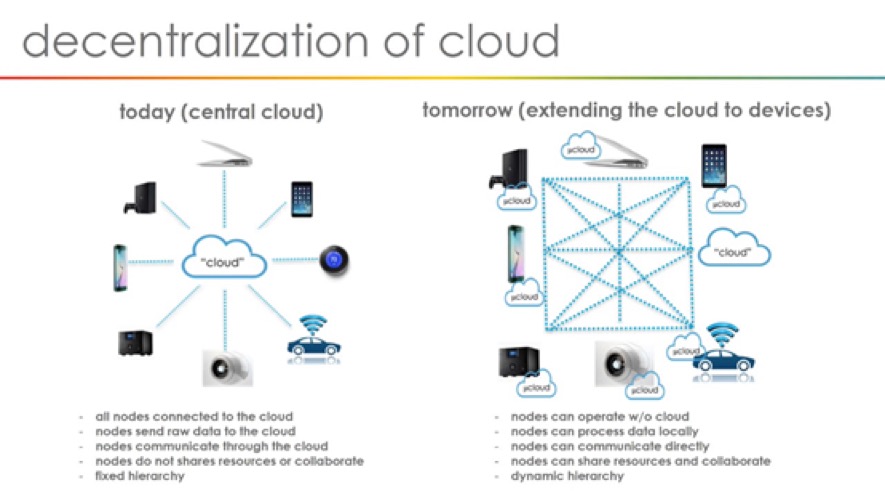 Matrix welcomed a third breakthrough: heat from mining farms will be used to warm up cities. The mechanism behind this is to use insulating liquid to collect heat emissions from the Apocalypse miners, and then send the energy to where it’s needed with the help of an AI-assisted Heat Exchange System.

Most of North China utilizes central heating during winter, which obviously could harm the environment. Matrix’s new method will help not only to lessen the harmful impact on nature, but also pioneers a less wasteful mining solution with environmental protection as a top priority. Dadamutu Village School in Ghulja, Xinjiang was the first to experience this new innovation. For the entire winter of 2020, heat from Matrix’s Apocalypse mining machines kept those classrooms and dorms at a temperature above 24 degrees, using only a third of the energy compared to furnaces. Matrix’s Carbon Neutral Mining is the solution to the difficulties Bitcoin mining farms are facing. If Matrix’s innovation is adopted on a massive scale, the tremendous social value this creates will make crypto mining relevant for China again. Already a number of Bitcoin mining farms have approached the Matrix team hoping to get the help of this technology to meet carbon neutrality standards. 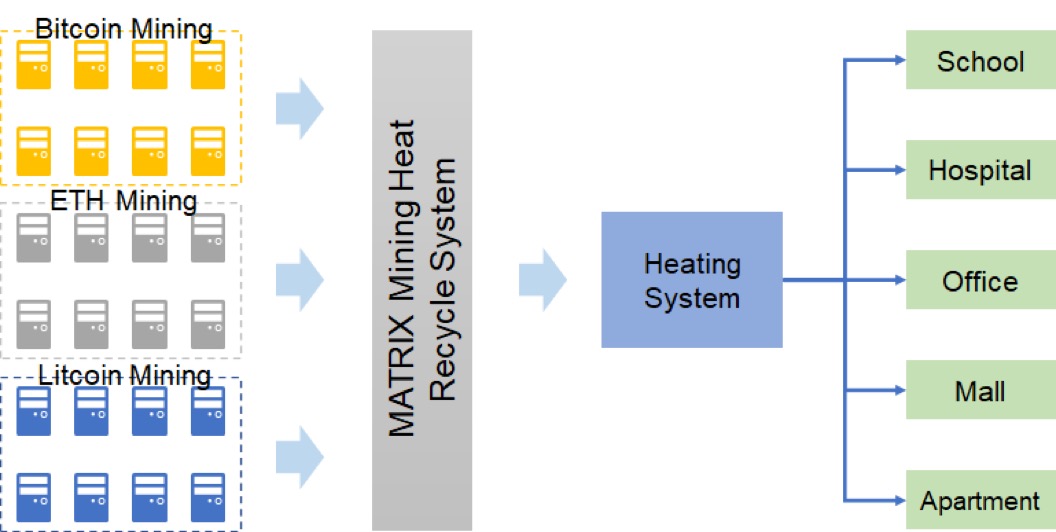 According to Matrix, besides adapting existing mining farms for heat recycling, the team is also seeking to apply its innovative technologies in Internet data centers, supercomputing centers and other scenarios where cooling is needed to help reduce emissions.

Sustainable development is the theme of our time, and carbon neutrality is a trend that cannot be reversed. Therefore, blockchain and crypto projects have to adapt. Matrix not only realizes the importance of socially beneficial mining but also has a practical way to implement it, which is very rare within the crypto industry.

China’s ban on Bitcoin mining has given Matrix just the right opportunity to shine, and Matrix will carry through with its promise of “More Public Benefit” and pioneer a greener crypto economy. Matrix’s solution takes advantage of the trend and turns it into an opportunity for the long-term growth of its ecosystem.

As Matrix integrates more computing power providers including PoW-based public chains into its network, the original sins of crypto mining will become history, and by that day blockchain will truly become a powerful tool for scientific research and the development of society.