2. Matrix has deployed its own high-performance object detection network: TDeNet. The system will monitor the condition of workers on site and trigger an alarm at the control centre when safe clothing standards are not complied with. 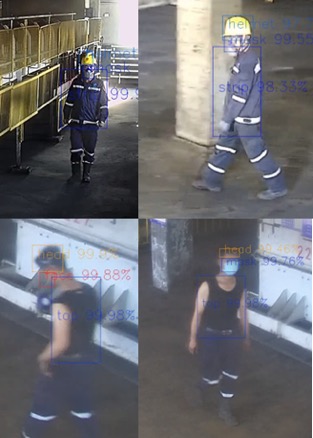 This feature can detect when excavators working in a coal mine have missing bucket teeth.

1. Object detection algorithms will analyse input from live cams installed on the front of an excavator. An alarm will trigger once a missing bucket tooth is detected. 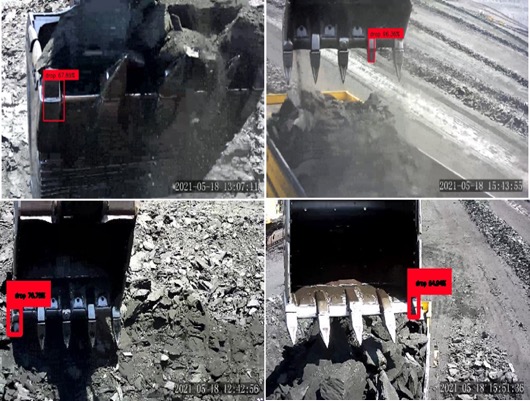 When AI detects the conveyor belt has ceased working, or that the coal storehouse entrance is stuck while the conveyor belt is still running, an alarm will trigger warning the workers on duty to take immediate action.

The left photo shows when the conveyor belt is functioning normally.

The right photo shows when the conveyor belt is stuck.

To remove useless substances mixed with coal, the first step is to use a magnet to extract iron. The surface of the magnet needs to be regularly cleaned to guarantee its effectiveness. Matrix algorithms can assess if the magnet surface needs cleaning by analysing live camera feeds. Once unwanted matter is discovered on the magnet surface, an alarm will trigger causing the attention of workers on duty.

The left photo shows a magnet whose surface is clear.

The right photo shows a magnet whose surface is covered with iron objects.

Coal from the mine is transported using conveyor belts, whose surface must be kept clean on the return journey so that the belt won’t be damaged by sharp objects. Matrix algorithms can analyse the condition of the returning belt surface using live camera feeds and trigger an alarm for workers on duty once anomalies are discovered.

The left photo shows when the return side is clear.

The right photo shows when the return side is covered with some unwanted matter.